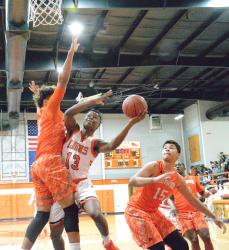 Special to The Teague Chronicle

The Westwood Panthers rolled into Teague with a #2 state ranking, a 31-2 overall record and undefeated in district play. But, the Teague Lions were neither impressed nor intimidated after an impressive upset 70-62.

The beginning of the first quarter began like two heavyweight fighters trading jabs and feeling each other out. Then, a few minutes into the game, the defense for the Lions began heating up. The Lion defense forced turnovers and got steals which led to sophomore guard Keshawn Rice to bomb one three pointer and get three more field goals for a total of nine first quarter points. This allowed Teague to take a 13-10 first quarter lead.

"We played great!” said Teague coach Chris Hair. “The intensity on defense was there probably 90 percent of the time. I had to point it out a couple of times, but they responded, came right back out after the time out and played great defense. We probably did the best all year pushing the ball when we got it."

In the second quarter the Lion offense struggled somewhat by missing shots and turning the ball over. The Lions only scored seven second quarter points, four by senior Tayvis Coleman and three by senior Tyrese Heard, which allowed Westwood to take a 26-20 lead and momentum going into halftime.

As the third quarter began, there were some questions as to how this Lion’s team would respond. Down by 6-points and Westwood taking a 31-25 lead into the half, will the Lions see another defeat? The Lions did answer that question, quickly, when Heard grabbed a defensive rebound and raced coast to coast, not once, but twice in the opening minutes of the third quarter. The Lion’s defense stiffened and with 5:45 remaining in the quarter Rice pulled up and landed a 10 foot jumper that would tie the score 26-26. The two teams traded punches throughout the remainder of the quarter but neither would back down. With Westwood leading 39-38 and 40 seconds left, the Lion’s junior point guard Kaigen Pillette hit a crucial three pointer to tie the game at 39-39. Teammate Keshawn Rice added two more points taking the Lions into the fourth quarter with a 41-39 lead.

"We lost a tough one when we went to Westwood. We were up 20-9 in the first half and we let them come back. So this is just to show us and to the teams that we will be facing in the playoffs that we are not a team to sleep on," said senior Mychal Shed. "I feel confident in our team. We are cooking at the right time so that's what we need."

With a two-point lead going into the final quarter the Lions showed their toughness by scoring point for point with Westwood. It was at the 4:40 mark that the Lions began to pull away. Following a coast-to-coast layup by Rice, Heard grabbed his own offensive rebound and put it in to stretch the lead to 51-46. But Rice and Heard would not stop there. With 2:55 remaining, Rice drained a three pointer and Heard answered with his own three pointer in the next 20 seconds to extend the lead to 60-51 forcing Westwood to call a timeout and try to slow the Lions down. The Lions defense never let up down the stretch and the offense was clicking by outscoring Westwood 29-23 in the final quarter to seal the win.

"We really have to listen to our coach,” Shed said. “He told us, the last time we played Westwood, that we let up and that if we wanted to win and prove to ourselves that we can do it we have to stay on the gas and we did that for the most part. We went up, but we let them come back and take the lead but we just kept being consistent. Once we got the lead back we just listened to our coach and executed what he said and we came out with the win."

Coach Hair said, "They're a big team; they don't want to run. We are a very athletic team so that's what we want to do. It's about pace. We controlled the pace so we got the win."

Junior guard Keyshawn Rice was named player of the game with a game high of 27 points. Other key contributors to the Lions offense were, Tyrese Heard with 16 points, Kaigen Pillette 8 points, Tayvis Coleman with 7 points, Mychal Shed with 6 points, Rodney Kuykendall with 4 points and Donovynn Smith with 2 points.

#13 Tyrese Heard makes a contested two point shot during the last district game in the Lion's den on Feb. 13. Photo by Monte Calame