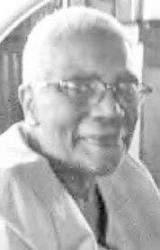 There will be a celebration of life for Ruth (Patty) Cox, a daughter born to Eli and Reacy Collins on Sept. 27, 1939 in Teague. Patty grew up in a Christian household with nine siblings. She accepted Jesus Christ as her Lord and Savior at an early age and made a joyful noise while playing the piano at First Baptist Church in Teague. During her high school years, she became a majorette at Teague High School and as a young adult she worked at Hermann Hospital, later she became and retired as a cook after 20 years of service. Patty enjoyed cooking for her family and friends, as it was her way of expressing love to so many. Patty married A.J. Cox January 16, 1963 in Houston and they raised five children. She made her final transition from this earthly life into eternal rest on March 27, 2018 at 3:15 a.m. She is preceded in death by her parents Eli and Reacy Collins, her husband A.J. Cox, her son Jeffery G. Cox, three sisters: Hazel Lewis, Vera McAdams and Laura Thompson; two brothers Eli Collins Jr. and Lonzo Collins. Patty leaves to cherish her memories, one sister, Marcie Anderson; three brothers Lawrence Collins and wife Alice, Luis Collins and wife Billie, and Lozell Collins and wife Mae. She also leaves behind her children Sabrina Collins, Elliot Collins, Muriel Cox, Lisa Cox, and her daughter-in-law, Sandy Cox; even grandchildren Fallon Johnson, Ashley Johnson, Jeffery J. Cox, Lorenzo Blackmon, Aesha Blackmon, A.J. Blackmon and Jasyn Cox; two great grandchildren Carter Rhea and Amira Nelson along with a host of niece, nephews, family and friends.