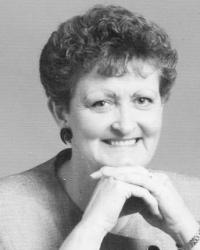 Funeral services for Mary Lou Robinson, 77, were held on Saturday, September 9, 2017, at 10:00 a.m. at Bowers Funeral Home in Teague. Bro. Scott Matthews will officiate. Interment followed the services at Union Cemetery near Freestone. Visitation was held on Friday with the family present from 6:00 p.m. until 8:00 p.m. at the funeral home. Mrs. Robinson passed away on Wednesday, September 6, 2017, at her residence near Teague. She was born on October 12, 1939, in Donie, Tx to James Edward and Lila M. Dozier Howell. She graduated from Teague High School with the class of 1958. Mary Lou married Billie Rae Robinson on May 23, 1957, and shared over forty-six years of marriage together until being separated by his death in June of 2003. She was a dedicated mother and homemaker, and worked for the Mexia State School, IMC Magnetics, Varo Incorporated, and Northwestern Resources before retiring. Mrs. Robinson enjoyed anything outdoors, hunting, fishing, gardening, and bird watching. She also enjoyed watching and cheering for her grandchildren as they played football, baseball, soccer, volleyball, and basketball. Mary Lou was saved while in the 4th grade at the Donie Baptist Church and was baptized in the Donie Reservoir. She loved angels and dogwood trees were very special to her. She is survived by three children, Dean Robinson & wife Kay of Fairfield, Debra Basham & husband Darcy of Teague, and Diane Robinson of Donie; five grandchildren, Kari Nix & husband Jordan, Chris Calk & wife Muranda, Jeffrey Robinson, Stewart Freeman, and Bradley Calk; two greatgrandchildren, Kyla Calk, and Kynlee Grace Nix; one sister, Betty Jo Pruitt & husband Jerry of Teague; one brotherin- law, Charles Robinson of Duncanville; other relatives and friends including a special friend and caregiver, Kathleen Munden and her son, Marvin Brown, who gave Mary Lou the nickname, “Ladybug”. Mrs. Robinson was preceded in death by her husband, Billie Rae Robinson; her parents; and two brothers. In lieu of flowers, the family requests memorials be made to the Alzheimer’s Foundation, 322 8th Ave, 7th Floor, New York, NY 10001 or online at www.alzfdn.org or to the Alzheimer’s Association, P.O. Box 96011, Washington, D.C. 20090-6011 or online at www.alz.org. Please visit our website at www.bowersfuneralhome.net to sign the memorial guestbook or to leave a message for the family. Bowers Funeral Home 900 U. S. Hwy 84 West Teague, Texas 75860 (254) 739-2511