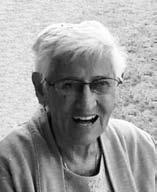 Funeral services for Mary Helen Hartley DeShazo, 90, were held on Sunday, November 19, 2017, at 2:00 p.m. at First Baptist Church in Teague. Bro. Scott Matthews and Bro. Walter Pickens officiated. Interment followed the services at Dew Cemetery. Mary Helen Hartley DeShazo was born to parents Ada White Hartley and Leonard Dalton Hartley on their first wedding anniversary, March 27, 1927. She grew up working in the fi elds with her daddy and siblings. Mary Helen (as she preferred to be called) worked hard all of her life. She loved working and could do a man’s work all day long. She met the love of her life in Childress, Texas in August of 1946. James Arthur (Jay or J. A.) DeShazo had just returned home from the U.S. Navy and for him it was love at first sight. When he asked her out, she simply told him she would be attending revival services preached by W. H. Colson and he could come if he wanted. They went every night and married only two weeks after meeting for the first time. He preceded her in death on August 23, 2005 just after their 59th wedding anniversary. Jay and Mary Helen came from Childress, Texas to Freestone County shortly after they were married. He fell in love with country living and farming and they moved to her childhood home where they spent the rest of their lives. Together they worked the farm and various other jobs throughout their lives. They owned several businesses in Teague and Fairfield, including a Montgomery Ward Store in Fairfield. Mary Helen or Nana as she was called for the last 50 years, went to be with her Lord on Wednesday November 15, 2017, in Branson Missouri. She loved living, going, and playing games. Music, especially church music, was an important part of her life. She played piano and sang all of her life. On her last day on earth, she was actively doing all of these. She loved her Savior, His church, her husband, and every family member with all of her being. She will be remembered as an active, hardworking, loving, giving, serving, Christian woman by all who knew her. She is survived by one son, Leonard Marshall DeShazo & wife Sandra of Elm Mott; one daughter, Paula DeShazo Johnson & husband Arthur of Teague; four grandchildren, Tammy Reid & husband Joe, Jimmy Pickens & wife Julie, Marcia Carter & husband Steven, and Joel DeShazo & Gwen Popp; eight greatgrandchildren, Ashley Reid Smith & husband Erik, Amanda Reid Baldwin & husband Tyler, Jaime Pickens & wife Kate, Jacob Pickens & wife Megan, Morgan Carter & fiancé Dylan Goff, Kendra Carter, Isaiah Carter, and Jet DeShazo; five great-greatgrandchildren, Dylan Smith, David Pickens, Mason Smith, Benjamin Pickens, and Reid Baldwin (and 3 more greatgreat- grandchildren on the way); one brother, Donald Hartley; one sister Yvonne Pendergrass both of Teague; one sister in-law Donna DeShazo; numerous nieces, nephews, many other family members and a multitude of dear friends. Mary Helen was also preceded in death by her sister Bonita Hartley White; three brothers in-law, Jack Pendergrass, Ballard White, and Tinker DeShazo; and one sister in-law, Betty Cox Hartley The family requests memorials be made to First Baptist Church, P.O. Box 791, Teague, Texas 75860, or to the charity of your choice. Please visit our website at www.bowersfuneralhome.net to sign the memorial guestbook or to leave a message for the family. Bowers Funeral Home 900 U. S. Hwy 84 West Teague, Texas 75860 (254) 739-2511