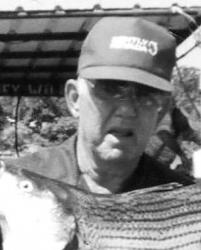 Graveside services for Delmar Ross Waldrip, 86, was held on Friday, August 18, 2017, at 10:00a.m. at Post Oak Cemetery near Donie. Ron Waldrip officiated. There was no visitation at the funeral home. Mr. Waldrip passed away on Monday, August 14, 2017, at the Teague Nursing Home. He was born in Donie on February 4, 1931, to Grover T. and Lennie (Scott) Waldrip. Mr. Waldrip was a lifelong resident of Freestone County. He served his country in the U. S. Army during the Korean War, and worked in track construction for BNSF Railroad for thritysix years before retiring. He loved to fish and raise cattle on his ranch in Donie. He married Shelma on May 28, 1982, and shared over thirty-fi ve years of marriage together. Mr. Waldrip was a member of the First Baptist Church in Donie. He is survived by his wife, Shelma Waldrip of Donie; one son, Gary Lynn Waldrip of Donie; one step-son, Michael Nicholas & wife Misti of Huntsville; four grandchildren, Sarah Dotson, Elizabeth Waldrip, Grant Nicholas, and Morgan Nicholas; one sisterin- law, Joy Waldrip of Donie; three nephews, Ron Waldrip & wife Mary of Corsicana, Stan Waldrip & wife Gayle, and Tommy Waldrip & wife Anna all of Donie; one niece, Gayla Long & husband Buddy of Dew; numerous other relatives and friends. Mr. Waldrip was preceded in death by his wife, Sarah Pearl Utsey Waldrip; one brother, Melvin Waldrip; and his parents. Please visit our website at www.bowersfuneralhome.net to sign the memorial guestbook or to leave a message for the family. Bowers Funeral Home 900 U.S. Hwy 84 West Teague, Texas 75860 254-739-2511