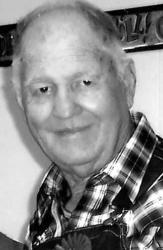 Funeral services for Charles Royce White were held at 2 p.m., Sunday, Feb. 4 at Bowers Funeral Home in Teague. Bro. Carl Clark and Bro. Johnny Veretto officiated. Interment followed the services at Dew Cemetery. Visitation was held on Saturday, with the family present from 6-8 p.m. at the funeral home. White passed away on Thursday, Feb. 1, 2018, at the Freestone Medical Center in Fairfield. He was born in Dew on Aug. 31, 1934 and lived in Dew all of his life. He married Gloria on Sept. 5, 1952, and shared over sixty-five years together. White worked as a carpenter for many years while also raising cattle, hogs, and chickens on his farm in Dew. He loved to visit with people and often kept items for sale in his yard just to attract people to stop and talk. He was also a regular caller on the Trading Post on KNES in Fairfield for many years. White was very active in his community. He was a former Board of Trustees Member of the Dew School and volunteered on the Dew Cemetery Board for many years. White was a longtime and active member of Corinth Baptist Church in Dew. He is survived by his wife, Gloria White of Dew; one son, Charles D. White of Teague; one daughter, Linda Hullum and husband Wayman of Teague; six grandchildren, David White and wife Monique, Joseph White, Rhianna Griffifin and husband Chris, Dylan White, Jason Hullum and wife Becky, and Justin Hullum and Anna Williamson; eight great-grandchildren; two brothers, Ronald White and wife Joy of Longview and Butch White and wife Betty of Mexia; three sisters, Sybal Lancaster and husband Paul of Lexington, Bonnie McCeig and husband Dale of Fairfield, and Sharon St. Clair of Dew; numerous nieces, nephews, other relatives and friends. White was preceded in death by his parents, Henry Edwin and Ruby Faye (Black) White; two sisters, Bobbie Jean Davis and Diane Neal; and one brother, Lynn White. The family requests memorials be made to the Dew Cemetery Association, P.O. Box 425, Teague, Texas 75860. Visit website bowersfuneralhome.net to sign the memorial guestbook or to leave a message for the family.