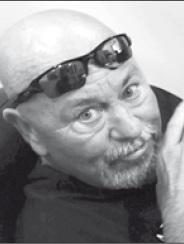 Billy Harold Williams of Fairfield, Texas passed away on Friday, October 27, 2017, at Odessa Regional Medical Center at the age of 61. He was born in Dallas, Texas on September 17, 1956, to Bill and Nancy Williams. He married Amelia Gallegos on April 14, 1979, at St. Bernard Catholic Church in Fairfield and was a member of the Catholic Church. Billy loved playing softball in church league, outlaw and co-ed with his wife Amelia and family. He loved watching all kinds of sports with his favorite being basketball. His favorite teams were the Boston Celtics and Larry Bird, Texas Longhorns and he was a fair-weather Dallas Cowboys Fan. His most favorite hobby was cooking on the grill. He loved to sit and listen to music, which he could do for hours, and go to concerts and music events with Amelia. After BJ had his son Jalyn the grandparents names had to be established and this is where the name G-Daddy came to life. From this point on this is what everyone called him. Besides his wife, children and grandson, Billy was most proud of his work. He was a Master Electrician for over 35 years. He started his career as an electrician at the age of 15 with his father who owned his own business. Billy also started his own business Lone Star Electric in 2006. Work took him and Amelia to several states as an inspector in the Oil and Gas Industry. He is preceded in death by his parents Bill and Nancy Williams and Grandmother Arlie Kay. Billy is survived by his wife of 38 years Amelia Williams and their children Elisa Williams and Billy Joseph Williams. Grandson Jalyn Williams. Brother Raymond Williams, as well as, the Gallegos family who loved him for over 38 years. A rosary will be held at 10:00am Friday, November 3, 2017 at St. Bernard’s Catholic Church with funeral mass following at 10:30am Friday, November 3, 2017 at St. Bernard’s Catholic Church in Fairfield with Father Savarimuthu officiating and Deacon Dwight Mahoney assisting. Burial will follow at Fairfield Cemetery. Pallbearers will be Mike Falkner, John Gallegos, Jacob Gallegos, Jose Gallegos, Jeff Miller and Nate Stolhand. Honorary pallbearers will be Mark Smith and Kirk Braungardt. An online guest book is available at www.griffinroughton.com Arrangements by Griffin-Roughton Funeral Home