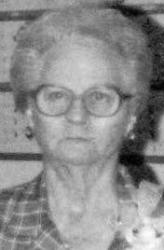 Funeral services for Bonnie Dell Bell will be held at 10 a.m., Thursday, March 15, 2018 at Bowers Funeral Home in Teague. Bro. Johnny Veretto will offi ciate. Interment will follow the services at Salem Cemetery near Freestone. Visitation will be held on Wednesday with the family present from 6-8 p.m. at the funeral home. Bell passed away on Sunday, March 11, 2018, at Baylor Scott & White Hillcrest Medical Center in Waco. She was born in Farrar on Feb. 12, 1933, to Archie and Eura Smith. She married Bobbie Murl Bell on April 10, 1950, and shared over sixty years of marriage together before being separated by his death on Dec. 18, 2010. Bell was a dedicated homemaker and enjoyed quilting and growing fl owers in her garden. She was also a fantastic cook. Bonnie enjoyed listening to country music and watching country music shows on TV and attended many fi ddle festivals. She was a longtime member of Cedar Creek Baptist Church and served as church secretary in the past. She is survived by one daughter, Margaret Bell of Teague; three sons, Bobby D. Bell of Teague, James R. Bell and wife Carla of Mart, and John K. Bell and wife Margarita of Teague; thirteen grandchildren; nine great-grandchildren; three sisters, Virgie White of Texas City, Glynda Matteo of Flower Mound, and Janice Smith of League City; one brother, Don Ray Smith of Alvin; other relatives and friends. In addition to her parents and her husband, Bell was preceded in death by one grandson, John K. Bell, Jr.; one brother, James Edward Smith; and three sisters, Joyce Coward, Elva Jean McCullough, and Juanita Gilliam. Visit the website at bowersfuneralhome.net to sign the memorial guestbook or to leave a message for the family.